The exhibition “Inner Ukraine” was held within the 13th festival of contemporary art “Terra Futura. The current event was beyond local patriotism and chose the scale of the whole country, not as a geopolitical unit, but as a symbol of "inner" values. 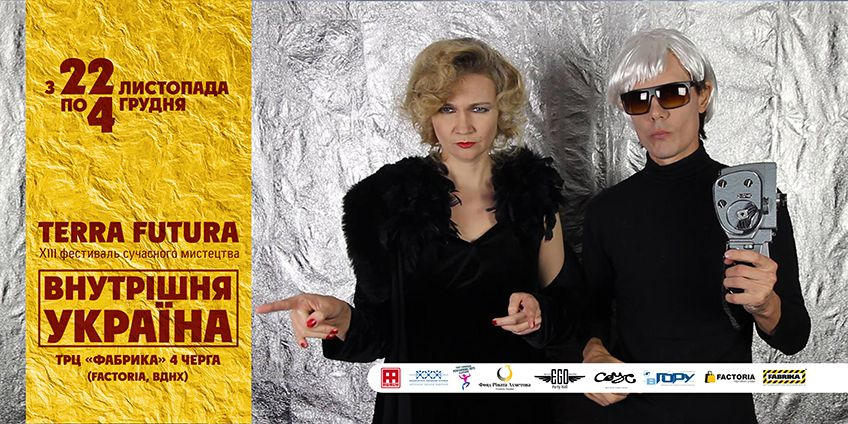 is there an exit from the zone

The exhibition “Inner Ukraine” was held within the annual 13th festival of contemporary art “Terra Futura” held in Kherson. The choice of the theme was determined not only by the events in this country, but also by the entire previous experience of the festival. Earlier we by means of contemporary art spoke about the problem of self-identification at local level. The current festival was beyond local patriotism and chose a more notable scale – of the whole country, not as a geopolitical unit, but as a symbol of everything what is close and dear to us. This is our home, all that stuff we fill our interiors with, where we are what we, perhaps, never are in the outside world. True.

All what the artists wanted to tell on the theme could be seen on four exhibition platforms – 2 small galleries, the private apartment and a big showroom of the shopping and recreation center "FABRIKA". Considering the fact that there were 48 authors from different regions of the country (Kherson, Lvov, Kharkov, Odessa, Kiev, Nikolayev, Dnepropetrovsk and Sevastopol), a variety of the presented visions – in the form of photo projects and installations made of furniture - blew the mind.

The program of the festival was divided into two sections: the public one with open access for all comers and “18+”. Journalists excited about it were explained that the second block does not deal with pornography or something like that. It is about provocative art the audience in the province is not always ready to perceive adequately - owing to its shocking “art nude” stylistics.

The similar situation was with one of the brightest events of the fest - Olga Lannik and Sergey Likhovid's project (Odessa) “Sight specific installations”. The artists were provided with the apartment they were allowed to turn into an art object. They coped with the objective quite successfully, having covered the walls with slogans and aphorisms and supplied them with remarkable illustrations. Then the artists presented a very provocative performance: they filled in a bathtub with imitation of a borsch and were swimming in it (almost nude), actively discussing books by Mr. Sorokin (a famous Russian postmodern writer). A response to this controversial show was rough and caused wild discussion on social media.

The essence of the project is more fully revealed in the second title of the project – “The Zone of Pathological Comfort”: the “domestic” psychology very harmoniously explains how to break stereotypes and try something new. For someone it is enough to change the residence, someone else will satisfy completely his craving for transformations through purchasing a new blind in a bathroom

…Alas, the human being is ontologically not capable of entering the discomfort zone of his or her own free will. Actually, a person is hungering for the only thing: to find an even more comfortable zone in a far or close prospect. But why not to follow Tyler Durden in the Fight Club: trash the escape from reality! Let’s try to experience everything here and now, all that pain and otioseness.

Automatism, habits, shadows of beloved people wandering from a refrigerator to a sofa, ghosts of the Soviet Epoch furniture, news line before going to bed – let's revel in those perverted pleasures before being overwhelmed by total disgust.

But photo projects appeared the most considerable and impressive part of the exhibition.

The “Sexy Rarity” project by Polina Karpova (Kharkov) was recognized the most large-scale (judging the size). It was hardly to remain unnoticed, just doomed to strike everyone’s eyes. However, not only due to its somewhat exaggerated (in comparison to other works) sizes. The heroine of the series is obviously an absolute sex appeal, from a small town, deliriously engaged in making a cult of her own body. The impudent photoset occurs in the semi-abandoned interiors of 90s. Each detail of the interior, each object are not only a print and identification of the Ukrainian reality, but also the birthplace, the childhood and stages of the formation of the heroine’s personality. According to Polina, this series is an “epic” about life and beauty of the generation of girls who are born in Post-Soviet Ukraine and have grown in its rather complicated conditions that tend to permanently change.

“This series is my search of beauty and I find it, but in environments and spaces that are far from being refined or exquisite. For me this series is a personal critical stage of vision and understanding of beauty outside my city, to be exact in the suburbs. Here it is shown not in a beautiful, glamourous wrapper, but in real life conditions of the girl”, commented Polina.

Nearby is the subtle and sorrowful project by Gennady Chernega (Kiev) called “glass walls” where various plots are being unfold behind glass – the observer seems to be safe, but this safety is getting more illusory day by day.

“There is war in my country. It has not reached the city I live in. I am afraid to wake up one day in the house without walls. I feel that every day they are inevitably becoming thinner and are more and more transparent…”

Elena Subach (Lvov) made some sort of an altar for presentation of her series “Pinterst. Just pin it!” Where she “pinned” her photos. “Crucify animals. Crucify saints. Crucify all of them. Enjoy beauty of your collection in the cozy corner”.

Elena Subach is a devoted and very convincing illustrator of the subject that is brilliantly exposed in Lars von Trier’s “Antichrist”. Meaning that all of us are hostages of behaviorism (Trier’s “Kingdoms of Satan”). Elena’s works are inspired by Gnosticism as well. The only difference is Von Trier’s film depicts the vacuum that occurs in the absence of God. Subach project pretend to have God in each detail – nevertheless, the emptiness is frighteningly comprehensive. Apparently, no difference. Though, Elena’s emptiness is chock-full of numerous signs of “God’s presence” - those cloned virgins Mary, eyes rolled up in ecstasy, religious processions leaving beyond the horizon of any belief … Infinite sublimation of exaltation. And all this “God’s grace” is against the ugliness a la Bosch. Not without reason the author prefers dual works – where the profane and sacred interact with each other, aggravating monstrousness, hypertrophying ritualism, bringing routine absurdity to new semantic levels. Everything works for it - flashes of light, flash of emotions, flashes of unexpected framing when foreground and background work in the same dual format.

Certainly, there is irony in these works, however, very gloomy, in Danse Macabre style. The religion is that part of the human sphere where post-modern tradition of mocking narration can lose to our inner aspiration for metaphysics. Even such ragged. “Esthetics” of trash is not just teaser, an artistic gesture, but a true reality to the utmost expressed through graphic compositions of “spots” of feelings and “lines” of destinies of heroes of photos, who are actually happy, regardless our snobbism.

Because a human being is measured not only by biology. Despite our “animal” nature we can’t but be mesmerized by “eternal sunshine” of transcendence – with deep belief in transformation that the Eucharist provides to us. And then through glum faces of ordinary people there appears the reflected light of the other existence that is not burdened by the evil – where there will be both punishment and requital. And mills of God will grind at last all incongruities of our awkward life.

Respectively, the general macabre tone of the project preferred by the author for sometimes angry, and sometimes a sympathetic reflection of the absurdity of life and schizophrenic patterns of its (absurdity) overcoming is quite relevant.

The Whispering Dolls series by the famous artist Stas Volyazlovsky (Kherson) (in regina gallery) is not simply a post-modern hint on the known novel byEvelyn Waugh, this is a continuation of the forever young subject “Who are our dead persons and how we bury them”.

For what do we love black English humour? For breaking the mold. For what do we love Evelyn Waugh? For that grace with which he broke stereotypes. The funeral office “Whispering Glades” (The Loved One) does not seem to be a place suitable for jokes, but the addiction to aestheticization of rituals and giving them of that absurd sacrality they do not deserve is an excellent reason for irony.

Someone skillfully “buries” people, and others burry naive hopes of inhabitants for a demography victory over war “child-devouring”. In both cases the power of rituals is obvious. As well as the power of invincible symbols used by “refined coffin makers”. Only a question of interpretation remains: is a red flower in the genital space of the hero of the series the Eros’s triumph (and in a long term – its “demographic” fruits) or a symbol of a sepulchral wreath for deadborn children (“ashes to ashes”)? Just to deprive war of an opportunity to profit. While the viewer is trying to guess this puzzle, Thanatos is still vigorously shuffling in our open spaces, Dolls are whispering, funeral offices are prospering … This is death that is an escalator of infinite opportunities. Life like ragtime is being played in the broken-off time.

Sergey Melnichenko (Nikolayev) presented the continuation of his sensational project “Loneliness Online” – “Part 2. Interiors”. The first project was devoted to the lonely men who were “treating” their egos with the squeezeed-out exhibitionism. The second part deals with the interiors left by these people. Several minutes ago everything was breathing fluids of one’s unrequited passion there. Finally, all is over.

“Love fever” is cooling down, hopes for the enthusiastic viewer are melting, life is expiring with a slow poison of disappointment. We are lonely. They are (interiors) are doubly lonely.

The project “The Room without Mediators” by Nikolay Karabinovich (Nikolayev) is inspired by Antonioni's movies. If these people saw, well for example, Antonioni's “Adventure”, they would be greatly surprised. Pictures they took in a hurry, through a cheap camera, and even a mobile phone, have amazingly something in common with shots from movies of the well-known Italian. The same emptiness, the same gloom of something untold, the unasked question floating in the air… The atmosphere of something mysterious and otherworldly. Lynch would envy. About what do these photos tell, or rather about what are these photos silent?

Marina Frolova's series “Drama Queen” (Sevastopol) - with the transvestite in a leading role – was supposed to be apart from the main exhibition, due to its evident provocativeness for the provincial audience. But it surprisingly caused no negative - in view of messages not clear for people. Well, a dude wearing a woman’s corset… Ok. The author of the project sees things more deeply: “This series is one of my numerous attempts of research of interrelation and compliance of a form and a content, external manifestations of the internal, congruence, authenticity”.

Here, actually, is what we were seeking for in the beginning - to discover, pull out and to show this “authenticity”. To compose the common Inner Ukraine from different fragments. The picture unambiguously turned out very interesting. True.

Superman is a "folk" icon

The Room without Mediators

While I am not at home

A series in progress 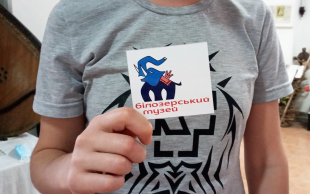 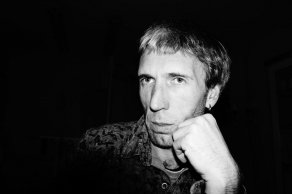 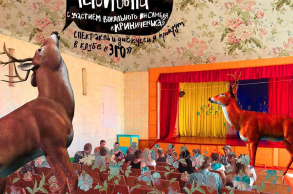